During the early days, the postage stamps included Bahrain’s name as an over-print until 1933 when pre-printed stamps were introduced.

For a brief period during the Autumn of 1947, the Pakistani Government in Karachi was responsible for managing the Bahrain Post offices. Following that, the British Post took over and assumed this responsibility in 1948. During that period, the postage stamps cost 5 rupees until July 1948 when the 10 rupees postage stamps were introduced.

In 1953, the first collection of local Bahraini stamps with a 1.5 “anna” denomination were introduced. These stamps were adorned with a picture of His Highness the late Amir Shaikh Salman bin Hamad Al-Khalifa, the Ruler of Bahrain, and were used for local and international mail and hence marked the first step of Bahrain fully taking over the postal services from Britain. In 1968 Bahrain becomes a member in the Arab Postal Unions.

Additional stamp collections were introduced in the early sixties which started to replace the ‘Bahrain’ over-print stamps as well as those with the anna denomination and these were adorned with Queen Elizabeth II picture.

During the reign of His Highness the late Amir Shaikh Isa bin Salman Al Khalifa, the postal sector witnessed many developments with great advancements made in the services offered as well as the post office network. Postal services also started to include non-core services with an overall aim to provide convenience to individuals and businesses. 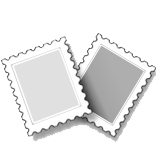